Interest in outsider art led to pursuits not only through galleries and auctions but antique malls, re-sale shops, and even classified ads in search of the obscure or undiscovered; artists or hidden or overlooked gems. Many anonymous pieces in our collection were discovered serendipitously or accidentally while others were sought out.

In the case of R.A. Miller, the latter is true. We noticed and ad in a local alternative newspaper that matter-of-factly read "R.A. Miller tins and drawings for sale" with a phone number and price for the lot.

Arrangements were made to view the work that had been acquired from the artist by the seller years prior. He mentioned his desire to sell some of the objects so that he could purchase a helmet for his new recreation- motocross racing.

As it turned out, he and his wife already shared our some of out acquaintances and friends in addition to a passionate interest in the arts. He was involved then as now in the packing and transport of art for fine arts institutions. We became buyers as well as friends.

The marker drawings on fiber board of alien beings are quite typical of Miller's work of that time period. The various insects and animals on fiber board as well as the flat cut outs in painted tin of red and bluebirds, and the dinosaurs were inspired by nature programs on television. Some of Millers work was made as individual, independent pieces. Others were sold as or originally considered as parts of larger whirligigs once mounted with nails or screws, then disassembled for sale to eager collectors. Miller displayed his work on the property surrounding his trailer. Dependent on prior sales, the selections would either be lush or sparse. 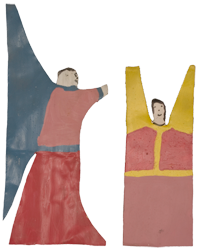 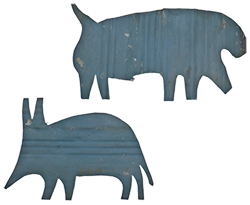 R.A. Miller's work has appeared in many exhibitions and is highly collectable. An exhibit at the Georgia Museum of Art, "Lord Love You: Works by R.A. Miller" from the Mullis Collection, featured over 80 of his paintings, drawings, and sculpture. Miller's self-taught kinetic sculpture was also included in the R.E.M "Left of Reckoning" video.

He worked in a cotton mill intermittently, but also traveled from town to town as a Free Will Baptist minister. His preaching led him his painting; allowing him to deliver his message to a wider audience.

We purchased the quintessential R.A. Miller cut out tin "Blow Oskar" at the auction of Howard K. Smith's and Doug Gitter's private collections at Kimball Sterling Auctions in Johnson City, Tennessee. As usual, we traveled though the hills of Kentucky to the quaint town within the span of a singular day. The collectors were a varied group who kept their paddles and their opinions close to their vests until the end of the bidding. The opportunity to purchase work form early adopters provided early work often less adulterated than what later may have become images or concepts purely for sale. 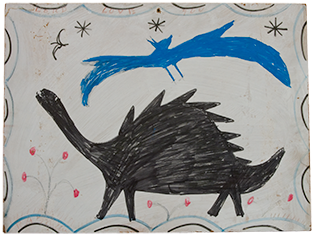 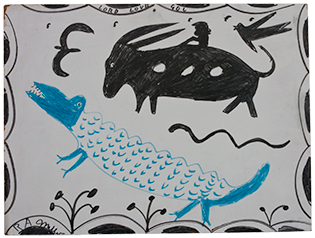 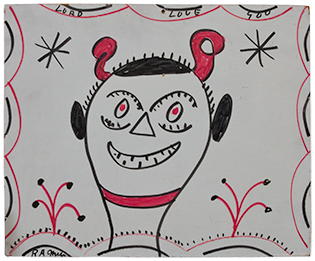 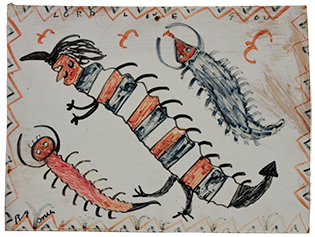