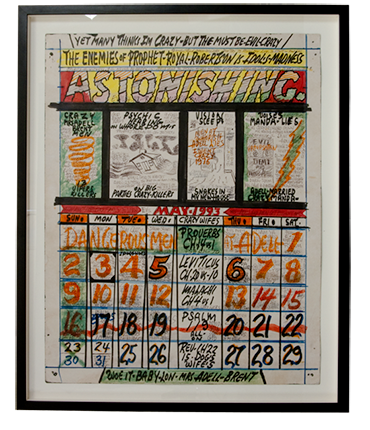 There is certainly a mysticism that shrouds the life and work of the artist Prophet Royal Robertson. He claimed to have had his first vision during his fourteenth year. His futuristic vision included a space ship with God as driver.

A former sign painter, he possessed an obvious artistic talent. Much of Robertson's work included images that conveyed artist against the forces of evil. It has been written with authority that Robertson suffered from paranoid schizophrenia. Delusions and confusions crept from life to art as evil was personified by fire breathing, godzilla-like creatures, venomous she-snakes, ... and most often verbal tirades directed at his former wife and mother of his children Adell.

His work was often two sided. One side would illustrate a powerful calendar with obvious numbers of pencil and ink pen layers of scripture and Robertson's mutterings of past, present, and future fears. The other side would divulge his imaginary underworld with comic book and sci-fi inspired characters who possessed psychic and other supernatural powers. 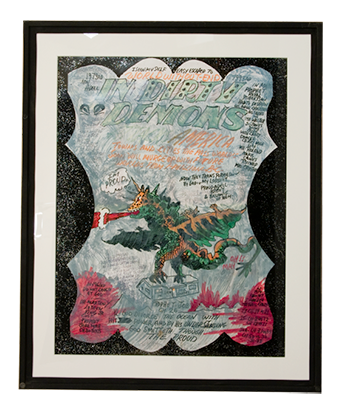 We purchased a two sided piece of Prophet Royal Robertson's work as high bidders at the auction of two private collectors held in April,1997 at Kimball Sterling Auctions in Johnson City, Tennessee. It was sheathed in a plastic wrap for both the preview as well as the presentation for bidding. We had noted the date, condition, subject matter, and presence of two sides prior to the bidding. We were successful in winning the bid and took the work to John Haney Framing with the direction that the museum worthy framing make available both sides for display and viewing.

One side is a calendar which illustrates the month of May, 1983. It delineates specific dates and the nature of his visions and paranoia. Warnings are conveyed through lightening strikes, snakes in his new house, crooks stealing his lumber, ....

The back portrays a fire breathing dragon with "I'm Proud" as the targeted sin. Robertson expresses his anger with Adell and those who conspired with her to assume custody of his children and move to Texas. Indeed, the front is graphically powerful, if not "astonishing." The back harnesses another spiritual power as he bares his soul once more in his art.