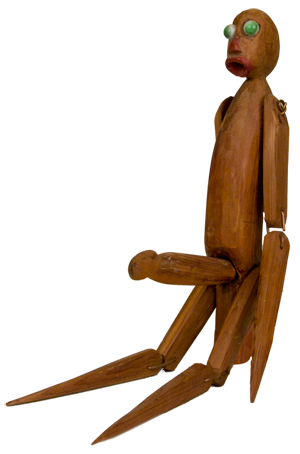 Howard Smith's collection of outsider art included numerous works by artists which could be described as "erotica." The sale of his collection by Kimball Sterling Auctions, Johnson City, Tennessee proceeded with a serious dignity mixed with a certain levity as only Kimball Sterling delivers. The auction was weighted by work from Ralph Griffin, Mary T. Smith, Son Thomas, and Willie Massey including numerous bird house constructions, plane constructions, as well as the deconstructed and decorously painted wood frame house in which he lived and worked.

The piece, now in our collection, was an articulated male figure 22" long made of cedar with an exaggerated, spring loaded penis. The well carved face is "boogey-man" scary. The green eyes are bulbous, defined by marbles. As with other York figural work, the mouth is also exaggerated, open as a wide "O." The piece was auctioned as anonymous, unsigned or dated, but Larry Hackley who was present authenticated the piece as made by York. The figure is unvarnished cedar with red paint on the mouth and nose. 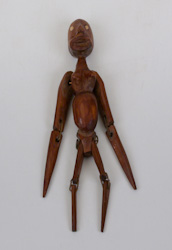 We also have a York cane. The handle of the cane is a streamlined torso with beady yellow eyes. The handle has been carved and affixed to the shaft of the cane with a cedar dowel or peg as a tenon. The figure's legs ninety into the shaft to form a cage for six marbles. Spiraling gradually around the height of the cane is a carved diamond patterned snake with white beady eyes. Again, unsigned or dated, the cane was purchased from Larry Hackley. It has a luster, if varnished at all, the sheen is a bit more apparent in the painting of the snake. 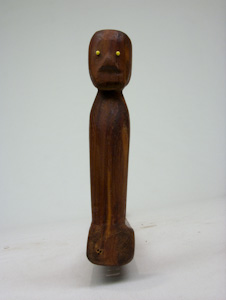 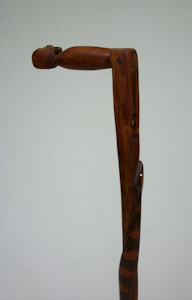 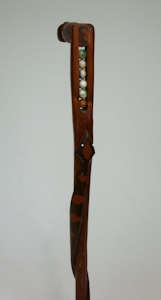