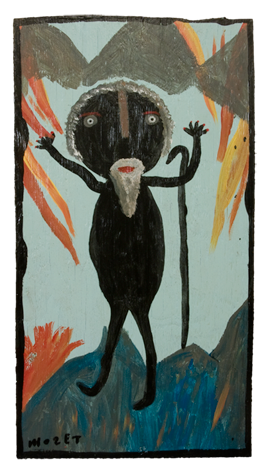 Mose Tolliver was one of twelve children born to a family of tenant farmers common in those days. He married early and started work early in his life in the fields and later began working in the furniture industry where he suffered a work related injury which resulted in permanent crippling injury to his legs. Tolliver taught himself to paint using interior and exterior house paints in his work often painted on scrap plywood and cardboard. Tolliver has a recognizable style and iconography without dimension or detail. Some of his work described often as figures riding a scooter or bicycle are graphic or erotic. He also enjoyed creating self-portraits, and abstract natural forms.

Some work being represented to the unknowing as having been painted by Mose Tolliver is often that of his daughter Annie Tolliver Turner. This is seldom an attempt to deceive. She worked side by side with her father for years signing his familiar "signature" to her work. She began signing her work as her own in the 1990s

The piece we have in our collection is clearly a unique work by Mose Tolliver. We purchased it in 1993 from the late Chris Wehling and Hal Wehling collectors from Cincinnati, Ohio. They had just returned from a trip south which included a trip to visit the artist Mose T. He was completing the painting as they watched. It is a powerful piece of what appears as an elder with staff at the base of a mountain. We had just returned from time in Jamaica and it's power and meaning resonated.

We met the Wehling's enthusiastic collectors of folk art and clocks at the "1st Annual Elliott County Folk Art Festival" in 1993. It was to be held in the backyard of Charlene's (Ferguson) Country Inn Bed - n- Breakfast in Sandy Hook, Kentucky. We had driven down at the behest of friends Paula Joerling and Tom Haney who were staying at Charlene and Clete's B-n-B. The Ferguson's were quite hospitable graciously asking us if we would care to park our Volkswagon camper van on their property overnight.

The Wehling's and many other people from all over the region had assembled there for an event under a huge tent. The event grew to such proportions that Garland and Minnie Adkins decided to move the event to their property in Isonville, Kentucky. Again, the event has taken a giant leap; now held in Morehead, Kentucky at a convention center in conjunction with other events at the nearby Kentucky Folk Art Center.