George Colin sacked and moved flour for Pillsbury for 30 years before his retirement. During that time and the period that followed his retirement, he devoted his spare moments to painting.

Our dear friends Sharon Lombard and her husband Amos Miller were the first to introduce us to Colin's work. Sharon, originally from South Africa and her family emigrated to the U.S. and lived in Washington, Illinois prior to her studies at the Art Institute of Chicago. She and her family, all gifted artists, befriended Colin years prior to his formal discovery which occurred late in 1989.

She and Amos, who met as students at the Art Institute of Chicago, purchased countless paintings and three dimensional work in their trips to and from Chicago and during the time they lived together in Washington, Illinois. George displayed work along the road side and stored other work in a dilapidated barn next to the renovated garage he and his wife Winnie shared.

At that time, his paintings were drawn on wrappers from large rolls of printing paper from nearby printing plants. The three dimensional work in Amos and Sharon's collection included two Elvis chairs and a "love me tender" table. 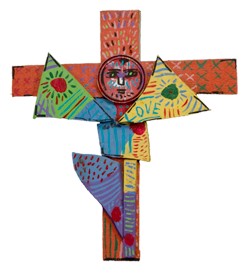 One year we were given a vintage George Colin cross which consists of an assemblage of bright painted re-cycled wood pieces and a paint can lid with a smiling face. It so boldly expresses "love." Another gift was an early snake cane.

We also received a large vintage pastel of two figures as my birthday gift in 1989. We had it framed with conservation materials and technique. Colin's only "formal" training was a Famous Artist "paint by mail" course he took in 1957. 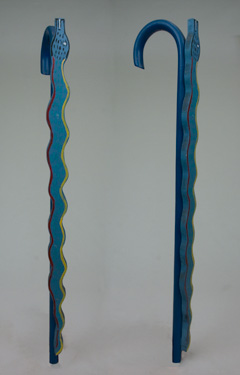 Apparently he has been obsessed with art most of his life. His home and most of it's contents are embellished as well as his constant work now on high quality acid free paper. His work has become quite collectible, with representation in galleries including Chicago galleries called "JustGeorge" and "GeorgeArt."

He deems his style "post naive." He paints in styles which have been called "Chagall-like" and "Picasso-like." Not deliberately derivative, his work incorporates his own sensibility and earnest, obsessive need to create.