These two unsigned paintings on plywood were discovered many years ago, discarded by the management of a bar in an urban community in Cincinnati. The paintings remind us of the James Brown song in which he describes "King Heroin." 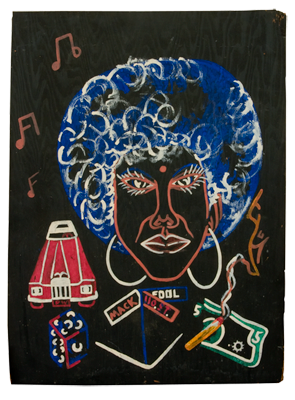 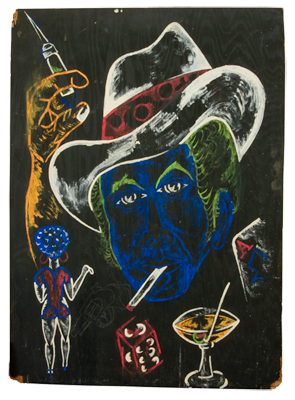 Ladies and Gentlemen
Fella Americans
Lady Americans
This is James Brown
I wanna talk to you about one of our most deadly killers in the country today
I had a dream the other night
And I was sittin' in my living room
Just dozed off to sleep
So I started to dreamin'
I dreamed I walked in a place and
I saw a real strange, weird object
Standin' up talkin' to the people
And I found out it was Heroin
That deadly drug that go in your vein
He said...

I came to this country without a passport
Ever since then I've been hunted and sought
My little white grains are nothing but waste
Soft and deadly, and bitter to taste
But I'm a world of power and all know it's true
Use me once and you'll know it, too
I can make a mere schoolboy forget his books
I can make a world-famous beauty neglect her looks
I can make a good man forsake his wife
Send a greedy man to prison for the rest of his life
I can make a man forsake his country and flag
Make a girl sell her body for a five-dollar bag
Some think my adventure's a joy and a thriller
But I'll put a gun in your hand and make you a killer
In cellophane bags I've found my way
To heads of state, to children at play
I'm financed in China, Ran in Japan
I'm respected in Turkey and I'm legal in Siam
I take my addicts and make 'em steal, borrow, beg
Then they search for a vein in the arm or the leg
So be you Italian, Jewish, Black, or Mex
I can make the most virile of men forget their sex
So now... So now, my man, you must... You know, do your best
To keep up your habit until your arrest
Now the police have taken you from under my wing
Do you think they dare defy me? I, who am king?
Now, you must lie in that county jail
Where I can't get to you by visit or mail
So squirm with discomfort, wiggle and cough
Six days of madness and you might throw me off
Curse me in name, defy me in speech
But you'd pick me up right now if I were in your reach
All through your sentence you've become resolved to your fate
Fear not, young man or woman... I'll be waiting at the gate
And don't be afraid, don't run... I'll not chase
Sure, my name is Heroin and you'll be back for a taste
Behold! You're hooked
Your foot is in the stirrup
And make haste, mount the steed, and ride him well
For the white horse of heroin will ride you to Hell

To Hell
Will ride you to Hell until you are dead
Dead, brother... Dead!
This is a revolution of the mind
Get your mind together
And get away from drugs!
That's a demand.