Originally from the state of Mississippi, Sulton learned carving at an early age from his father. He began carving later in life when working the night shift while employed at a chemical plant.

His work has been included in the permanent collection of museums and countless exhibitions. One such exhibition for which we have a catalogue, the 1992, "It'll Come True: Eleven Artists First and Last."

We purchased our male figure from Art Jones Gallery, Cincinnati, Ohio in 1989. We assumed he had seen it among the offerings in Larry Hackley's van and become inquisitive. It was the first opportunity we had to see Rogers' work in person.

The female figure we have in the collection appears as though she has just squeezed herself into her bulging pink dress. This piece was purchased from the collection of Richard and Maggie Wenstrup. 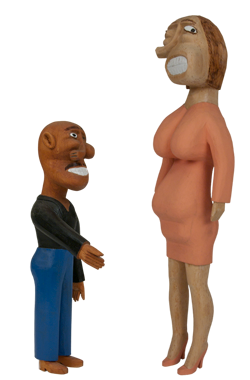