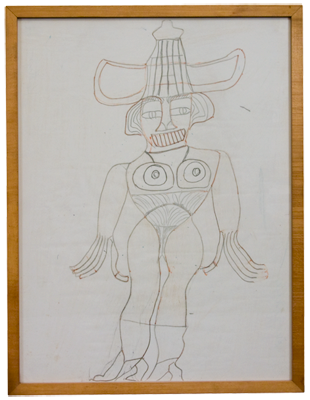 The subject matter for Henry Speller's work intrigues us as those who would prefer watching a film on Netflix rather than a series of television shows on a given night. The lone Speller drawing in our collection depicts a subject common to much of his work; a character from the television series: Dallas, from the 1980s.

Our untitled figural drawing, we were told, is a character from this once popular series. If not for the cowboy hat and boots, we would not see an obvious connection to the show. The drawing is imaginative, sketch-like on Arches paper, in graphite pencil and crayon. Speller's drawing was prolific, this one leaf of a pad, the indentations of the previous drawing became faint negative spaces among the continuous lines of the artist's renderings. We purchased this piece as high bidder's at the "Private Collections- outsider art" auction at Kimball Sterling that we attended April 26th, 1997 in Johnson City, Tennessee.

A son of a share cropper and cotton farmer originally from Mississippi, Speller began drawing, according to Betty-Carol Sellen's "Self Taught, Outsider, and Folk Art" after his move to Memphis, Tennessee in 1941. We have seen other examples of Speller's work which seemed to incorporate subjects or images initiated by his viewing of television. Other drawings included in the same auction were steam engines and train trestles which look like images from "Petticoat Junction."