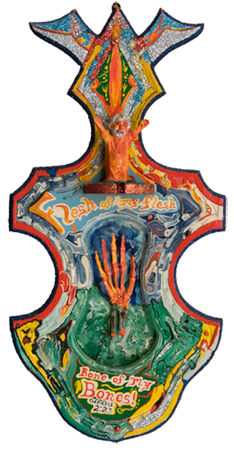 "Self-Taught, Outsider, and Folk Art" Betty-Carol Sellen's authoritative "Guide to American Artists, Locations, and Resources" provides that the artist formerly named David Jones' was called by the Lord to "spread the message of salvation." Prior to serving his Lord, he had served in the U.S. Air Force, as well as having worked for the telephone company.

His work, and that of his wife Cherry, was included in the 1994 exhibition which highlighted the "Folk Art from the Collection of Sallie M. Griffiths. Shown at the Art Museum of South East Texas, Beaumont, Texas. His work was also included in "Spirited Journey: Self Taught Texas Artists of the Twentieth Century," University of Texas, Austin.

We traveled to Johnson City, Tennessee to attend an auction of a private collection held at Kimball Sterling Auctions. Friends Dick and Maggie Wenstrup were unable to attend but asked us to bid on specific lots as well as the work of artists' they had identified in the catalogue. 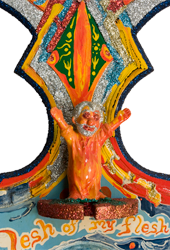 We were able to bid and win the artist's work titled "Bone of My Bones" Flesh of My Flesh. A highly embellished, if not psychedelic shield-like shape of (re-purposed) wood the work has numerous Biblical references.

The real (or super realistic) bones of a severed wrist and hand are focus as is what appears to be a self-portrait of the artist as a spiritual leader. We are still attempting to find out about the doll figure; which apperas to be a modified version of a mass marketed doll. We think it bears a definite resemblance to Jerry Garcia another highly revered cultural icon.

Xmeah Sha Ela'ReEl and his wife Cherry started a church referred to as "The Children of Christ of America." His art, as well as many of Cherry's works, are constructions with messages meant to convey and spread his spiritual message through strong visual symbolism and allegory.