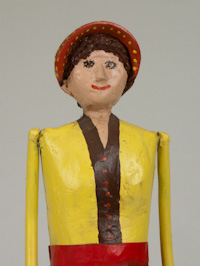 Brandau's work was first introduced to us by Maggie and Richard Wenstrup, passionate collectors and friends, living in New Richmond, Ohio. They were in perpetual motion during the 1990s, in particular, day trips in their van east of New Richmond over to Huntington, West Virginia or down to Maysville, Kentucky with frequent detours in between. They stopped in mom and pop diners and bakeries as their sweet tooth cried for attention.

Jackson became one of those detours. Brandau worked in a factory as a tinsmith having learned his trade from his father before him. He tinkered with whirligigs and other wind driven assemblages, including a ferris wheel. He also made airplanes, and animals including birds. After retiring in 1992 he devoted his days to collecting discarded metal and wood to use in his sculpture.

He began making figures of men and women of tin which he soldered into their form and then spray painted. Maggie and Dick purchased a suited man about nine feet tall. We wondered how they wrestled it into or on top of their van! One trip in 1995, they brought back a piece of Brandau's work they thought would be "good" for our collection, we agreed. The figure, a small woman with swiveling arms whose pleated dress was formed with tin. She has a formed bonnet over her head, her face composed of painted auto body putty.

We were fortunate to have work from our collection represented in the 1996 two person exhibition at the Riffe Gallery in Columbus, Ohio. The show, "In Their Own Time" provided an opportunity to see other examples of Adam Brandau's and Carl McKenzie's work. The show was well curated and was a fine juxtaposition between the two artist's media. But the Brandau figure of a man, on loan from the Carl Hammer Gallery, Chicago, Illinois towered over the art and space leaving quite a formidable impression. 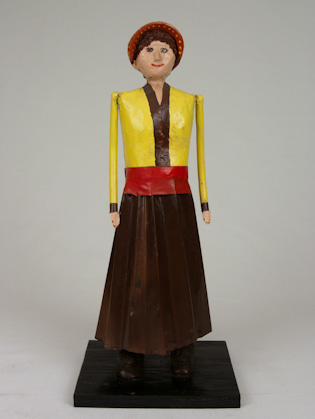 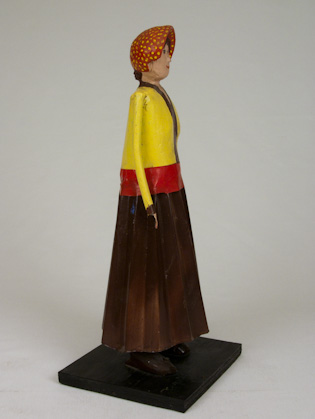