Much has been written about Ike Morgan and his long term institutionalization in Austin State Hospital. At the age of sixteen, he was judged mentally incompetent to stand trial for a violent crime. Now in his 50's, Morgan still suffers from chronic schizophrenia but has been living on his own while immersing himself in his painting.

At the time of our introduction to his work in September, 1988, through Art Jones Gallery, Cincinnati, he was expressing himself through the portraits he created on cardboard. The cardboard materials that were available were limited mostly re-cycled. The pastel crayons and paints were those provided for recreational purposes. The subject matter was garnered from images he saw in magazines including Time, Newsweek, and Playboy. His self-taught painting in the late 1980s was primitive and childlike, haunting, almost frightening. His pastels were sometimes smeary, without fixative. He now works in a much more systematic and professional manner. He works on several pieces daily with commercial paper, paints, and pastels.

We purchased the "Woman with Perfume Bottle" in 1988 at Art Jones Gallery . The "Cowboy" was purchased through a "private collections" auction at Kimball Sterling Gallery, Johnson City, Tennessee in April, 1997. 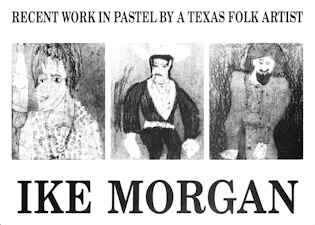