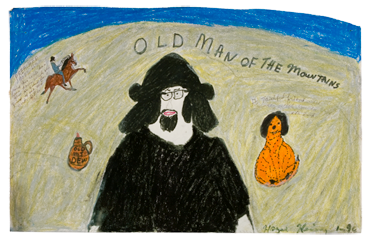 We met Hazel Kinney, the widow of Noah Kinney (1912-1991), after his passing. She was living in a little house in Vanceburg with her chubby little dog. She was so sweet and shy with us. But she seemed to have an immediate trust largely because we had come to drop off a care package with mutual friends Dick and Maggie Wenstup. There were baked goods, and more utilitarian goods she would not have to go out for in the dead of winter. She was obviously grateful.

This was not our first meeting, Hazel attended regional folk art events including openings related first to Noah and brother-in-law Charley Kinney's (1906-1991) work. We recall Hazel at the Hackley Gallery's Holiday Show in November, 1997 which included her work. She even traveled to the show of Charley Kinney's work at Only Artists in Cincinnati, Ohio. She seemed particularly proud of Noah and Charley's work in "By the People 19th and 20th Century Art of the Folk and Self-Taught" curated by Lee Kogan, Director of the Huntington Museum of Art in West Virginia in 1994.

Hazel had begun to draw earnestly around 1995. She was drawing and painting on scrap lumber and other re-purposed materials left over from daily life. She used magic markers, watercolors, colored pencils, and crayons to draw and fill in the spaces. Her work was very sensitive and innocent mostly memory drawings of country life and some biblical scenes.

We purchased a piece in 1996 titled "Old Man of the Mountains." The work illustrated the dark image of a man who appeared untouched by society. Also drawn in crayon was her little dog with verse in pen along side which reads "a faithful friend will stay with you to the end." Another drawing of a man on a horse with verse described the preacher seeking out "Old Mtn. Dew" to cure is ailing wife. The jug of "Old" Mountain Dew was not a "soft drink" but "moonshine" distilled to this day in the region.

The collection also contains a country scene Hazel drew in December of 1996. We were given the piece as a Christmas gift by Dick and Maggie Wenstrup that year. It is a long crayon piece which shows a distant farm and horse drawn carriage and sleigh as well as a red cardinal. The work is very nostalgic with subject as well as thoughts of our dear friends Dick, Maggie, and Hazel all no longer with us.

In the fall of 1999, when they were all still very much alive, Larry Hackley curated an exhibition at Transylvania University. He asked if we would lend Charley Kinney's "War (wire) Walking." Of course, we were delighted to help. Among the work, Noah's wood carved animals including a tiger, a rabbit, a snake. A splendid Charley Kinney's painting of a fox and chicken, a moonshine still, and a tornado. And Hazel's work, a surprise to those who did not know she was a deserving, developing talent. The show, aptly titled " A Eden of Their Own: Charley, Noah, and Hazel Kinney of Toller Hollow Kentucky was an impressive and comprehensive curation which honored the work of the three artists.