Born 1963 and lives in Louisville, Kentucky.

Although we have not yet met Mark Anthony Mulligan, we have a certain kinship with him as well as his work. He lives and works in an urban setting. He embraces the grit and the intensity of the city including the twists and turns of streets and the hodgepodge of competing corporate logos and signs plastered on buildings, billboards, posters, and large scale digital media.

Mark Anthony Mulligan is a self-taught artists. He does not drive but derives and absorbs material for his work from the bus rides that he takes criss-crossing the city. He draws and paints from memory. He works in un-mixed acrylic paints and pen or pencil on paper or larger found panels. His wit and sense of humor are evident in his work. He enjoys creating acronyms from names of corporations and other entities which he then incorporates in his drawings. Some of the names which appear on our drawings: "I Smell A Rat University,Walking Stix Bourbon Inc., Calder Mobile Service, Orchestra Pit Chevron, Beerwood River." 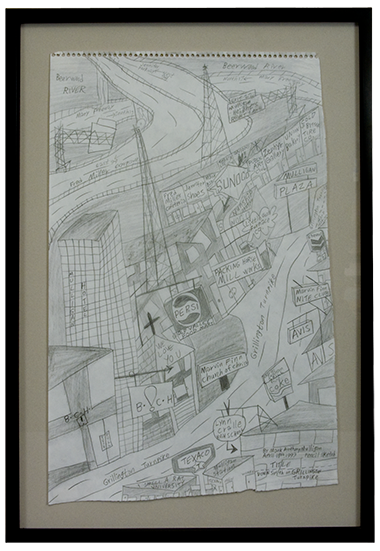 Mark Anthony Mulligan is represented by Swan and Cralle Gallery, Louisville, Kentucky. His work has been exhibited in shows including "Signs and Logos: The World According to Mark Anthony Mulligan, 1993 at the Kentucky Folk Art Center, Morehead, Kentucky. Also, African American Art in Kentucky at KFAC, 1988. Another show was held at Bellarmine, In Louisville in 1995. His work is in the permanent collection of KFAC as well as the New Orleans Museum of Art.

Our friends Maggie and Dick Wenstrup had two large pieces of his painted work. One piece was a take on the Chevron logo sign the other was a large graphic city scene. One day they called and said they had something we might like. They brought over a piece that consisted of two pencil drawings on paper.The two panels were drawn on two consecutive days, April 17th Title: Cornbird Hills and Down South on Grillington Pike on April 18th, 1993. The buildings have dimensions, the streets and businesses have names, ... We decided we like the scale of the drawings and although some collectors prefer Mulligan's brightly colored paintings we feel a calm within the chaos of this two panel drawing. 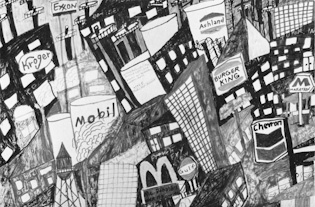 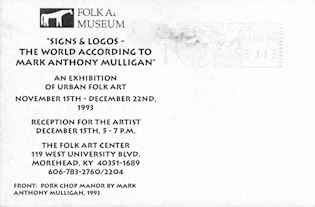