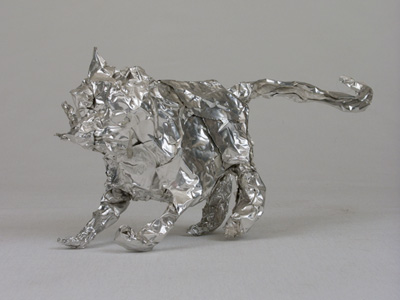 We have seen his paintings, and ceramics, as well as his tin foil animals. Along with the Pelner's, as well as Gerald Wertkin, the Museum's Director, a group of approximately twenty interested and interesting people from all over the states descended on our loft as well as the homes of friends Maggie and Richard Wenstrup, and Larry and Cyndy Huston. In addition, the personal collection of Lois and Richard Rosenthal was visited and their namesake Lois and Richard Rosenthal Center for Contemporary Art in downtown Cincinnati.

The group's circuit in Cincinnati was also enriched by side trips to the Kentucky Folk Art Center in Morehead, Kentucky. They also traveled to Shaker Village and Berea Kentucky to visit the Hackley Gallery.

One favorite moments of the tour revolved around a question posed by Greg Pelner. He asked "what is your favorite animal?" I said, "that's tough because I am a real animal lover. I guess, cats!" His mother gave him his backpack from which he pulled silvery plumbers tape. While we continued explaining the collection and answering questions he was simultaneously working on what turned out to be a tape sculpture of a cat! We treasure it and his generosity. He has since included us in his list to receive his annual holiday card. He is truly gifted and we are always enthused to see what he has been passionately involved in with the ever present support of his family.