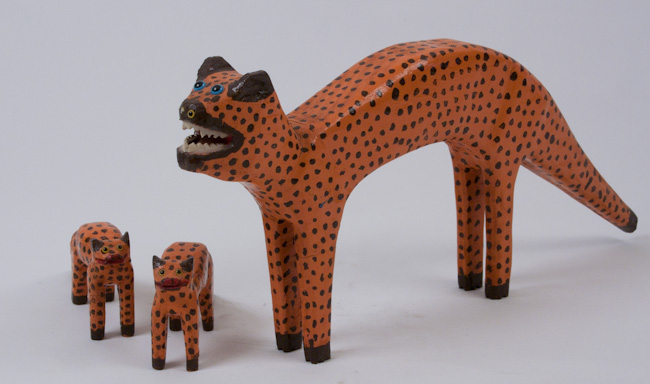 We remember Denzil Goodpaster as a tall, quiet, peaceful man his wife was a diminutive, quiet, sweet woman always close by. We saw him at most of the outdoor folk festivals we attended up to his passing. He always wore a blue shirt and a pair of faded blue overalls. It was apparent he was a farmer not only because of his attire but the exposure to his skin and his paling, fragile blue eyes. He may have appeared delicate at that time of his life but biographies of his life suggest a heartier, self-sufficient man who farmed working there until the age of 65. He raised crops common and profitable to his locale including corn and tobacco as well as sorghum and hay for his livestock. No doubt a "victory" garden was a necessity, too, ingrained in a simple, rugged life. When he ceased actively farming in the 1970s he began to whittle and carve. He is best known for his walking sticks, or canes but also created carved figures, and animals common to his daily life. 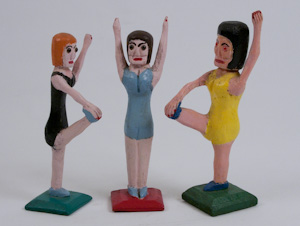 We have a spotted cat with two kittens. Although the color of paint is orange, we can envision an orangish cat with spots wildly defending her young with bared teeth. We purchased these pieces at the Kentucky Folk Art Center in Morehead, Kentucky in the early 1990s. The cane with four thin long snakes was purchased from the artist at "A Day in the Country" in 1993. We purchased what we call "cheerleaders" or the girls doing "aerobics" directly through Goodpaster at the Morgan County Sorghum Fest in 1994. Goodpaster's dexterity with knife and brush were not as keen as in previous years.

The cane with the nude and two snakes was purchased from the collection of Eason Eige retired Director of the Huntington Museum of Art. An auction of his collection was presented by Garth's Art and Antique Auctions in Delaware, Ohio in January, 1997. The cane with the green salamander and coiled snakes with shovel handle and the hissing spiraled snake with teeth entwined with a second green snake were both purchased from Richard Edgeworth at his home in Chicago, Illinois in November, 1994. Denzil Goodpaster did not date his work. DG was carved into the wood and painted over in earlier pieces then in later years he wrote DG in pencil or ink after completing the painting of the piece.

Denzil Goodpaster's work was honored in 1996, the year after his death, in a show at the Kentucky Folk Art Center, Morehead, Kentucky. 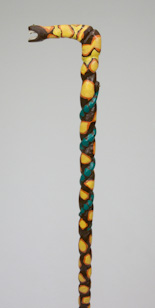