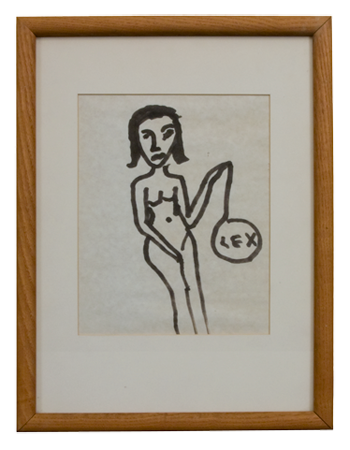 This portrait of a dejected, forlorn woman is so direct and evocative. The piece was given as a birthday gift in 1989 by friend and art historian Arthur Jones, of Art Jones Gallery. It is by an acquaintance of Jones named Erwin "Lex " Shipley. We regretted knowing so little about the artist but revel in how much was said with so few lines. Recently, we received an email from Athur Jones. Jones provided invaluable information from which we will quote.

"Erwin "Lex" Shipley was born in West Virginia in 1924 and died in Lexington, Kentucky, in 1993. When I first met him in the 1970s, he was living in Owensboro, KY, where he was a long-time resident. Largely self taught, he was an interesting personality. His appearance was strange, his speech was slurred, and his body movements were somewhat affected due to a stroke. He also had difficulties in life brought on by mental illness and other problems (such as alcohol during some periods of his life). I have many memories and interesting stories about Lex." Jones also mentioned numerous paintings by Shipley among his collection. Jones continued, "I think that the Owensboro Museum (Kentucky) has several of his works in their collection too."