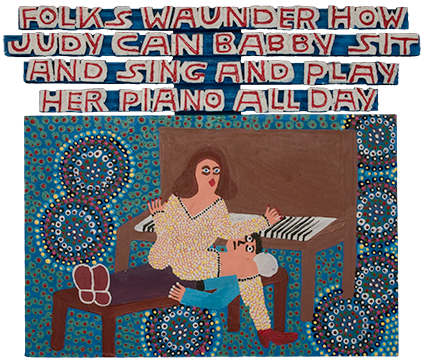 "Self Taught, Outsider, and Folk Art" by Betty-Carol Sellen describes Jennings as having been raised and "lived with his mother, a school teacher, until she died in 1974." Jennings works ranged from bird houses, ferris wheels, angels; all colorful constructions. He used graphic symbols some target like, resembling pointillism, often included verbiage which added luminous humor to the assemblages. His "Tufgh" women beating up on men were frequent subjects for his apparently bawdy sense of humor.

Jennings created some larger work including "Folk Art World." His work was exhibited in notable shows and was represented by such dealers as Mike Smith's At Home Gallery in Greensboro, North Carolina.

The piece we have reflects upon the arduous work of baby sitting and playing the piano simultaneously. It was a piece that was originally in the pre-eminent collection of Maggie and Dick Wenstrup. When they realized we had yet to procure a piece of Jennings' work, they offered to sell us this outstanding example of his work.

He was described in his later years as an emotionally troubled man. He became paranoid and felt very threatened by the barrage of visitors and collectors. His fears and concern over his declining health led him to commit suicide in early 1999. 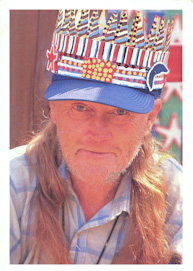 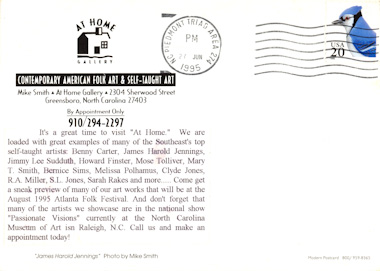