IntuOutsiderArt.com is a work in progress, information relating to the artists will be updated continuously.
IntuOutsiderArt may be interpreted as conveying dual meanings. We are into those who create outside the mainstream art world because they create without constraints. Many of the artists can also be described as intuitive. Their singular desire and creativity is instinctive, if not sub or unconscious. Much has been written to describe or label such art, including but not limited to art brut, folk art, self-taught art, visionary art, ... these terms probably have little meaning to those who are driven by some internal mechanism to simply express themselves. And, the means of expression is no less personal than the motivation of each individual artist. Our goal is to share our collection and re-collections of a decades long interest in the artists and their work.

Our initiation to non-traditional "folk art" occurred in 1980, while living in Washington, D.C. We viewed the exhibit "Black Folk Art in America" at the Corcoran Gallery of Art. We were captivated by the stories about the artists and their instinctual, inventive, and individual forms of self-expression. The memory of seeing then, our first drawings by Bill Traylor and Inez Nathaniel Walker, paintings by Nellie Mae Rowe, George Williams figures, James Hampton's aluminum foil throne, the replica of the Spirit of St. Louis by Leslie Payne, ... will not be forgotten.

Eight years later while living in Cincinnati, we purchased our first pieces, an Edd Lambdin monkey with go-go boots and barbell and a J.B. Bailey man. It was obvious, we were hooked for life. We could hardly wait for Saturdays, we knew somehow we would make our way down to Fourth Street's, Art Jones Gallery; what a brilliant name! When Art later moved, first to Lexington, then to Virginia, we knew the city had lost an innocence that could not easily be replaced. But Maggie and Richard Wenstrup proved to be more significant, as friends, companions, and exuberant mentors. 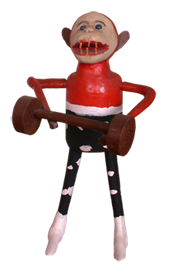 We began to seek work through dealers including Larry Hackley and pieces from the auctions of seminal collections. We would always see the same 30 or 40 faces. Internet auctions came later, and rising bids resulting from a wider audience including The House of Blues' insatiable appetite. More often than not, we would focus our attentions on figural work, especially couples.

Our greatest find occurred many years ago, we discovered what are some of Carl McKenzies's earliest figures. A thin man, carved from the two inch side of a two by four and a woman with flaxen hair and a yellow dress, both unsigned; were included in a 1994 traveling retrospective of work, titled "The Art of Carl McKenzie."

Our collection is comprised of artists throughout the U.S. including Ohio, Kentucky, West Virginia; some of whom have been and remain overshadowed by their contemporaries. As collectors, our interests were not regionally bound. Some names will be quickly associated with media or style, others unfamiliar.

The collection has become less dedicated to work exclusive to the U.S. The idea that weaves the collection together is humanity, that which makes us human, including spirit. Literally or figuratively taken, this could mean the human form, or the spiritual self; captured in Dan masks from the Ivory Coast, the Baule figures, or ceremonial masks from Mexico. We are enlivened and enriched by discovering others' creative force and expression and hope others are into it, too.
</html